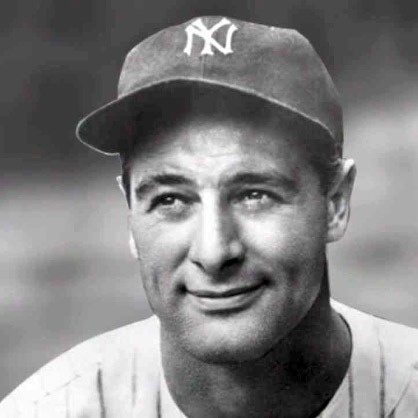 The Power of Gratitude

I saw this over the Independence Day Holiday and thought I would pass it along.

Maybe your family is like mine. It seems we hear a LOT of bad news lately. There seems to be a lot of gun violence. Politics seems to be very ugly and divisive. And investment markets are down.

So, I was VERY happy to see this item that reminded me about how important it is to be grateful for the great things in my life. I am mostly healthy, for a 60-year-old American male. 😊 Everybody I love is pretty healthy. We are blessed to have my 84-year-old mother in our life and she’s doing great. My kids are pretty happy and doing pretty well. We are VERY LUCKY indeed.

So, I try every day to be sure I am sufficiently grateful for my many blessings. And it’s in that spirit I share the following with you.

This year on the Fourth of July was the 83rd anniversary of Lou Gehrig’s famous farewell speech. On the Fourth of July in 1939, New York Yankees legend Lou Gehrig gave his famous “Luckiest Man on the Face of the Earth” speech in front of a packed Yankee stadium. The team had declared it “Lou Gehrig Appreciation Day,” to celebrate the retirement of the vaunted first baseman.

He batted fourth in the Yankees lineup—in the shadow of rival Babe Ruth—but Gehrig had distinguished himself with such feats as 23 total grand slams (a record that still stands), 1,995 runs batted in, a .447 on-base percentage, and a .632 slugging percentage—the highest for a first baseman.

The country was mired in the Great Depression and on the verge of WWII. America still cared very much about baseball and was shocked by Gehrig’s rapid physical decline and sudden retirement. Less than a month prior, on his 36th birthday, he had been diagnosed with amyotrophic lateral sclerosis (ALS), a physically debilitating motor neuron disease that carried a life expectancy of less than three years. How could this happen to the invincible Gehrig, a member of the Yankee’s 1927 “Murderer’s Row,” considered by many to be the greatest batting lineup of all time?

As he composed himself to speak at home plate about his confrontation with the disease that would later bear his name, Gehrig was flanked by the Yankees and visiting Washington Senators. The ground in front of him was dotted with trophies and gifts from devoted groundskeepers, custodial staff, and admiring VIPs—he had to set them down one by one because he no longer had the arm strength to carry them.

Here is what he said that day:

"Fans, for the past two weeks you have been reading about the bad break I got. Yet today I consider myself the luckiest man on the face of this earth. I have been in ballparks for 17 years and have never received anything but kindness and encouragement from you fans.

Look at these grand men. Which of you wouldn’t consider it the highlight of his career just to associate with them for even one day? Sure, I’m lucky. Who wouldn’t consider it an honor to have known Jacob Ruppert? Also, the builder of baseball’s greatest empire, Ed Barrow? To have spent six years with that wonderful little fellow, Miller Huggins? Then to have spent the next nine years with that outstanding leader, that smart student of psychology, the best manager in baseball today, Joe McCarthy? Sure, I’m lucky.

So, I close by saying that I may have had a bad break, but I have an awful lot to live for."

The crowd cheered their beloved hero for two full minutes.

You can hear his comments here - https://www.youtube.com/watch?v=4DWNOa6dJ6o

The grace and the gratitude that Gehrig showed that day are remarkable. I find his speech inspiring me to be more grateful.

I suggest that you take a moment and reflect on all the things that are good in your life and be grateful.

Gratitude is a powerful counterbalance to all the negative energy the world likes to throw at us. Maybe a little gratitude can help you keep your perspective as you go through your life. I know it helps me.

If you know somebody who suffered from ALS, or is fighting the disease now, maybe send a few dollars to the Minnesota ALS Foundation to support the research effort.

If you’re looking for more inspiration, check out these classics for help:

As always, if this is prompted you to have questions for me or want to talk with me about your personal financial goals, I am honored to be of service. Follow this LINK to find a time for us to talk.

Dunncreek Advisors does not provide legal or tax advice, nor is this article intended to do so.