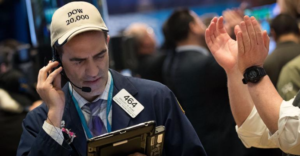 So this fabulous expansion has crossed the 20,000 mark. What should you do?
I suggest you reflect on a few points:
• The market is up. That's good. Over the last 81 months the private sector added 15.6 million jobs and in November the unemployment rate hit 4.6 percent for the first time since August 2007. The Federal Reserve recently raised interest rates and commented on the "remarkably resilient" economy. So, all is well.
• The Dow is outdated, but it's got history. The Dow Jones Industrial Average tracks the share price of 30 large U.S. companies. The index was created in 1896 and has been tracked since then. Actually, the S&P 500 is widely recognized as a better reflection of the U.S. stock market. And both the Dow and the S&P track the only the largest companies in America, which leaves out thousands of stocks. But, the Dow is the number we have been tracking longest. So, it holds a special place.
• Big numbers mean less. As the index raises, each milestone means less. The Dow first crossed the 1,000 mark in November 1972. At that time, a 100-point move was a 10 percent change. Today 100 points is one-half of a percent. The Dow took 14 years to move from 1,000 to 2,000. It has taken about 32 months for the Dow to move 5,000 points from 15,000 to 20,000.
• The Dow list is arbitrary. The list of 30 companies is selected and monitored by a committee. The group will change members of the Dow 30 from time to time when they think it's necessary. Sometimes this can hurt the index's performance. In 1999, they added Intel and Microsoft right before the peak of the dot.com bubble. It took 15 years before those stocks returned to their 1999 level. And in 2015 AT&T was replaced by Apple. Since then Apple has fallen 6 percent and AT&T is up 24 percent.
• It's just a number. But sometimes numbers matter. Since the most important factor in investor success is human behavior, we need to remember that psychology really does count. Big numbers like this tend to create a little of their own momentum. Many people have Fear Of Missing Out on the stock market rally, so they may buy more stocks as the Dow hits new highs. And this sentiment will raise the value and attract more buyers.
• Remember, we are herd animals. Humans tend to follow our herd instincts with investment and we often decide to buy at the high and then hold on until deep in the pullback to sell. Some investors repeat this pattern of buy high and sell low until they have lost serious money.
• Good advice and a solid plan with get you a long way. All of this reminds us that it's important to be clear on your goals. Invest in a prudent allocation for your goals AND your time frame. Then, stick with your plan regardless of the distractions that come along. This is where a fee-only fiduciary financial planner can be a huge asset. These advisors are committed to the client's best interest first and they get paid only from client advisory fees and so have no financial interest in any investment products.
If you want to celebrate Dow 20,000 with a new financial game plan, contact my office at rdunn@dunncreekadvisors.com. I love helping families find the smartest ways to reach financial goals. Dunncreek Advisors does not provide legal or tax advice, nor is this article intended to do so.